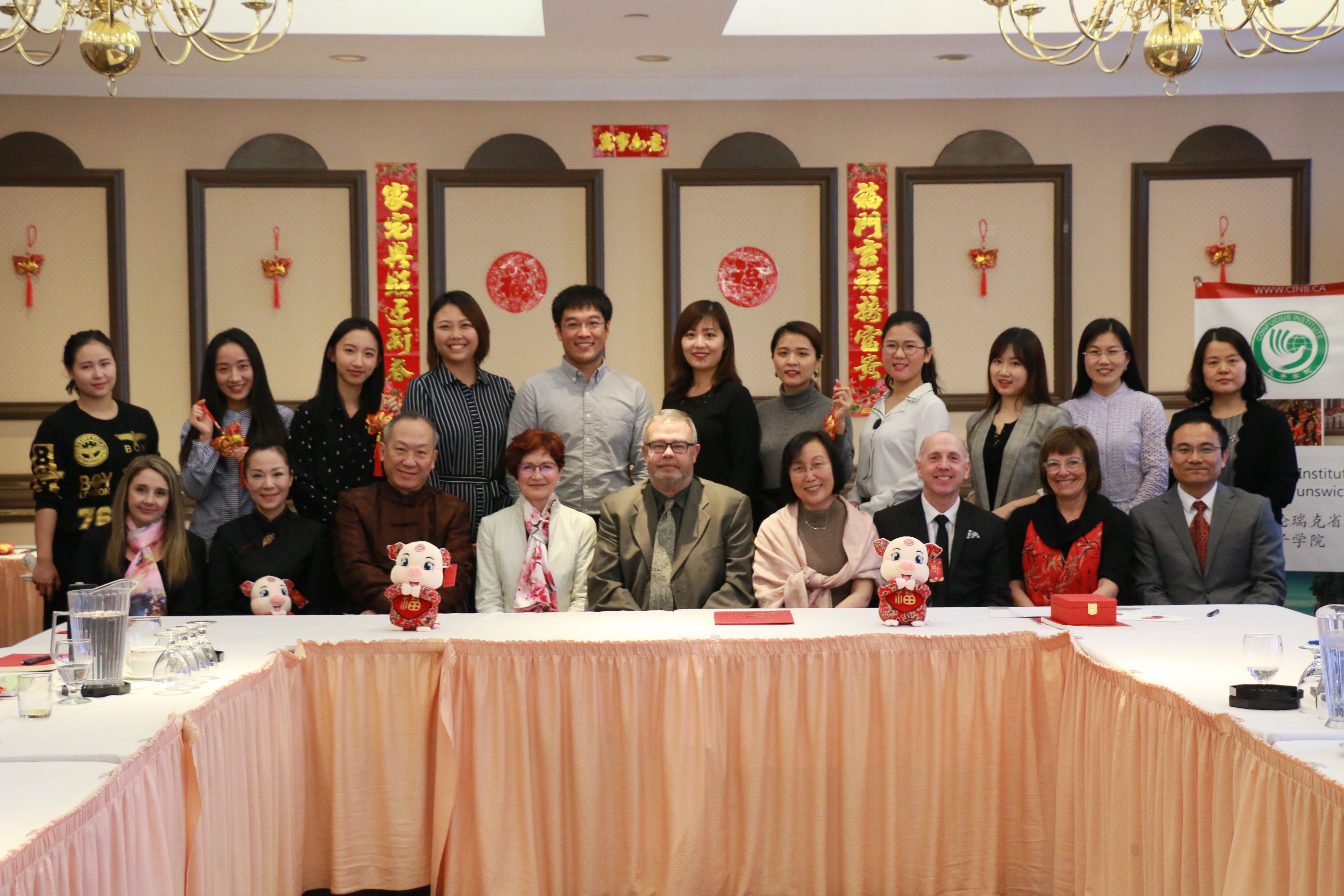 The meeting from the 5th to 6th was hosted by Teng Jing, Director and Superintendent of CINB. Each Chinese teacher made a 30-minute report on the theme “Me in Cross-Cultural Communication”. They shared the setbacks and growth in their work and life using vivid pictures and lively stories. They also made in-depth exchanges on the three teaching topics, “teaching Chinese effectively”, “making the most of the teacher’s strengths” and “choosing the teaching materials for different grades”. Li Yanmei set the chess promotion as a typical example in the Chinese lessons, and also summed up her experience to help promote chess teaching in NB. Liang Jiayi shared her stories happened in her homestay family. Teng Jing used her own cross-cultural experiences to explain the meaning of “the loss is a blessing”. She pointed out, “Everyone in the Confucius Institute is a window for the local people to understand China. All CINB teachers should be the most convincing representatives of the contemporary China. You need to treat issues from a higher perspective and deal with them in a more inclusive and intelligent way. It is your duty and glory. You are involved in the world of internationalization. As we all know no culture refuses open heartfelt communication. So by the principal of ‘the loss is a blessing and heart-to-heart communication', we are not only cultivating the future of the NB province, but also learning and growing here. We should strive to become an outstanding person with an international vision.” These speeches brought everyone’s tearful resonance.
On the morning of January 6th, professor Yang Jian compared the unique singing, recital, acting and fighting of Peking Opera with the world music, dancing, acrobatics and even makeup. Ms. Pei Yan trained all Chinese teachers with physique exercise through a "Cheongsam Show". Liang Jiayi popularized the knowledge of martial arts and taught the "martial arts exercises" which were easy to learn and promote. 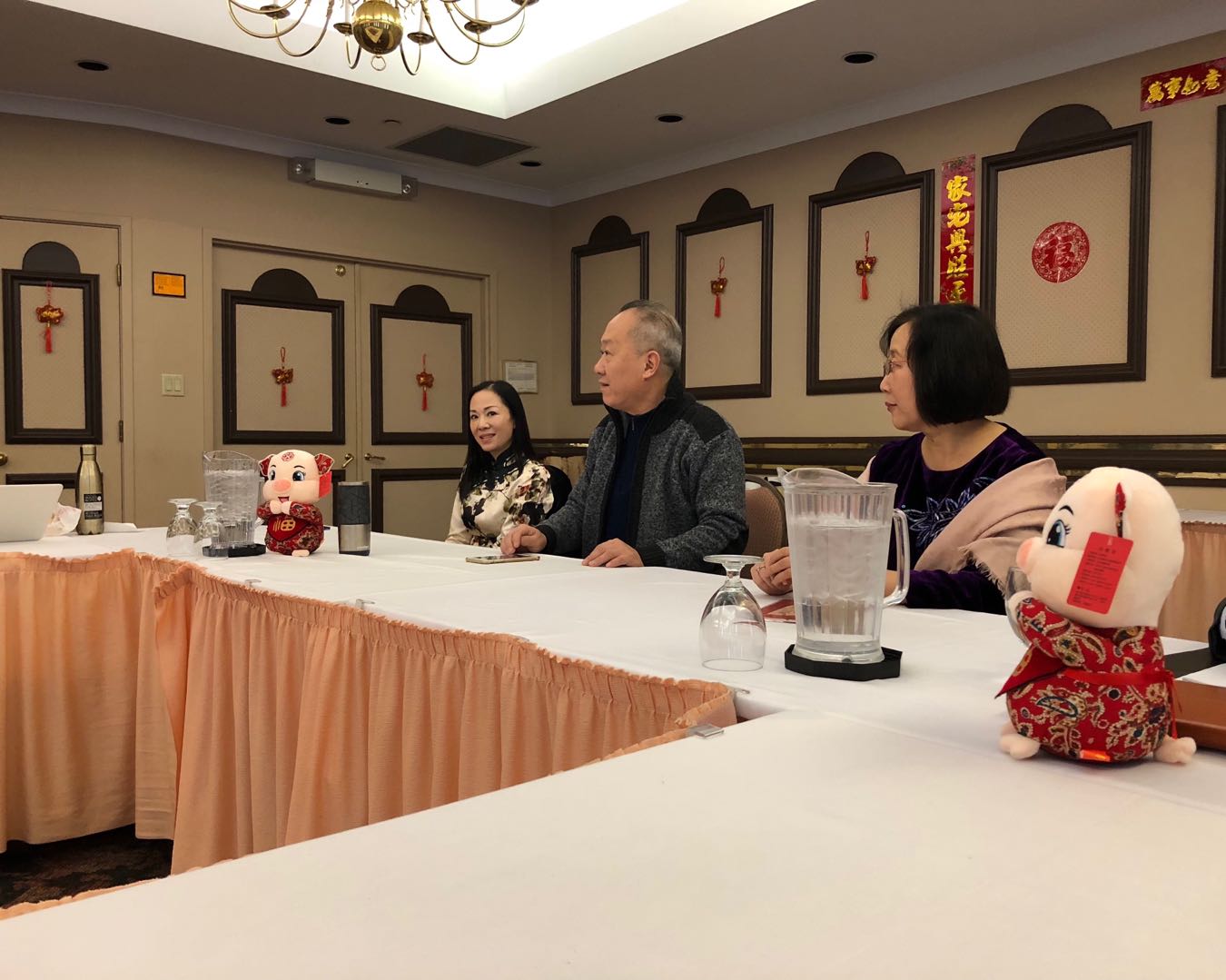 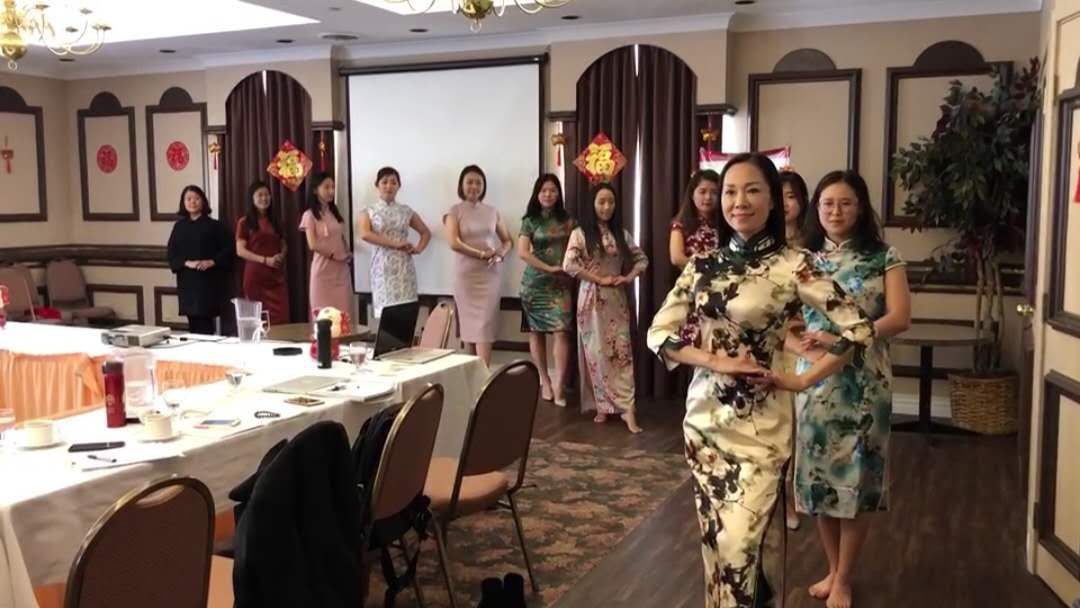 On the 7th, the representatives of CINB teachers from different school districts reported their work and experience to the provincial school districts and AEI. Volunteer teacher Chen Zhisheng played the traditional Canadian folk song Red River Valley with Erhu, and all the people sang the song in both Chinese and English to express the beautiful and lasting friendship between China and Canada, which pushed the atmosphere of the meeting to a climax. Liang Jiayi performed martial arts, which not only showed the daily teaching process, but also conveyed the unique characteristics of martial arts compared with other fighting sports. After the meeting, Yang Jian played traditional Chinese music Galloping Steed on Jinghu having all the audience on their feet. Pei Yan performed Huangmei, Beijing, Yue three kinds of operas with splendid appearance. The two professors were appointed as art advisers to guide future cultural activities in CINB. Dawn Weatherbie issued the letter of appointment for them on the spot. 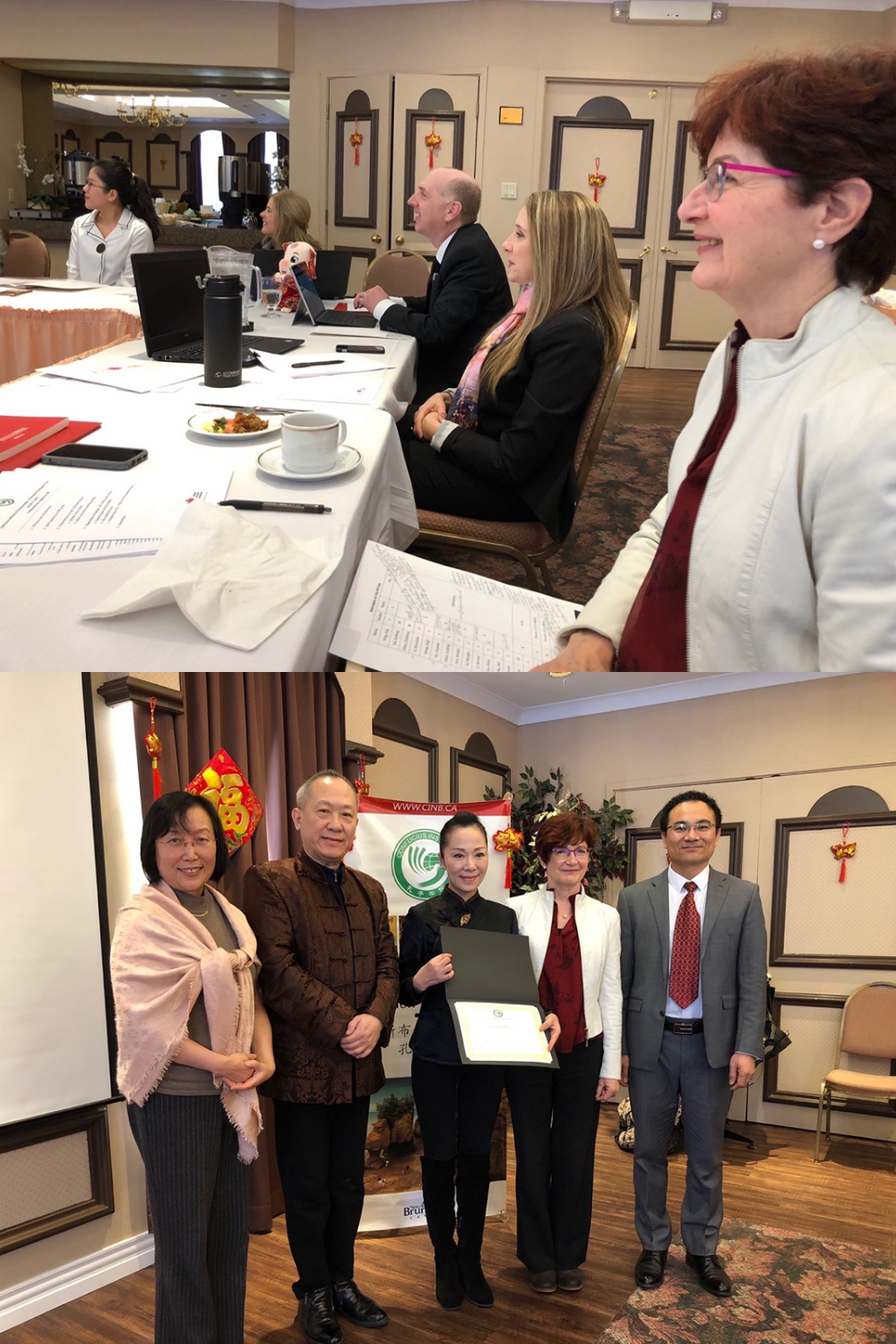 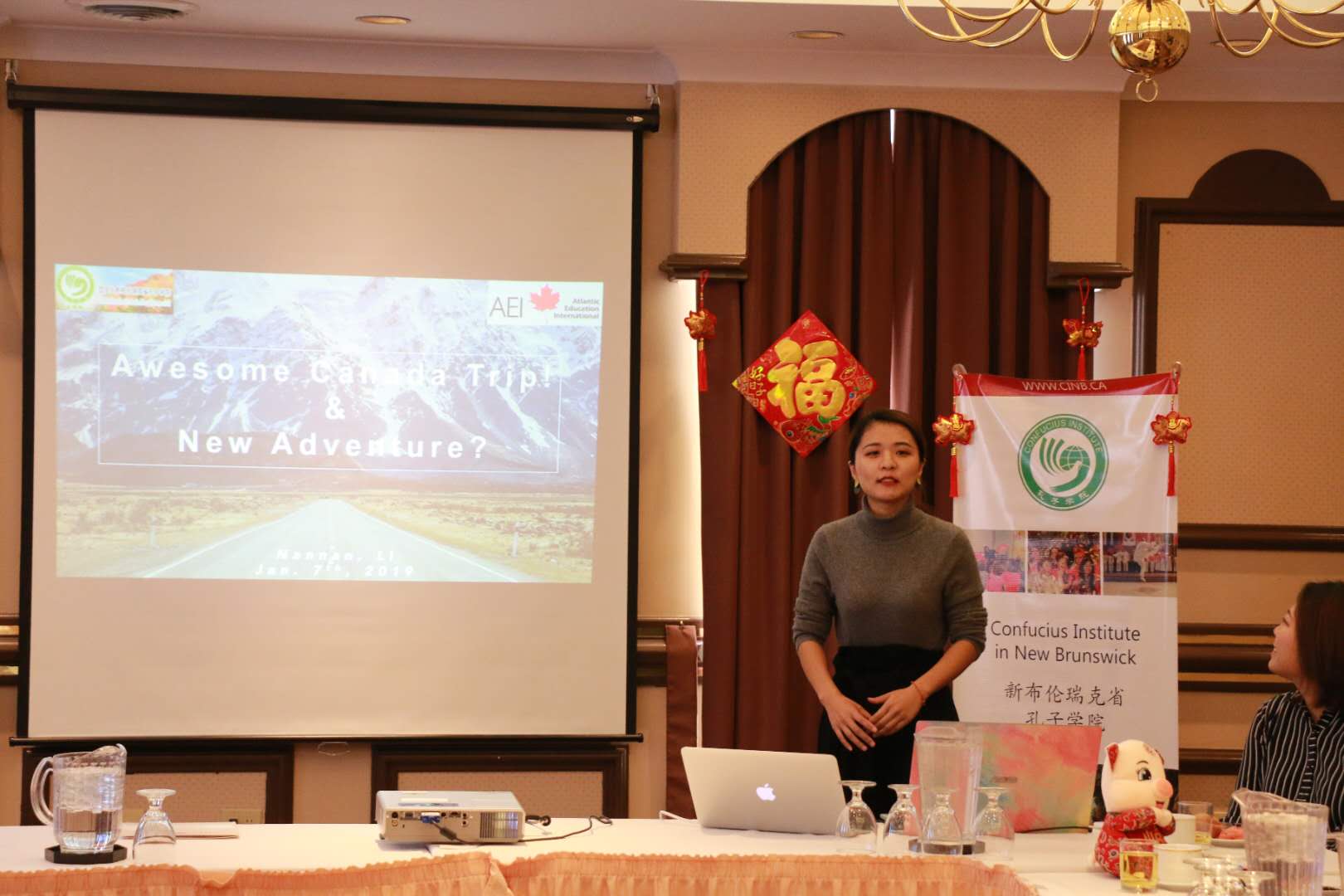 Chinese teacher, Li Nannan has been working for CINB for 4 years.
Joanne Williams affirmed the work of the Confucius Institute teachers and pointed out that they were well received and praised by local teachers and students. Dean Mutch pointed out that the 17 schools he was responsible for needed more Chinese teachers and sent a sincere invitation. In her speech, Dawn Weatherbie expressed her gratitude to all Confucius Institute teachers who brought internationalization to the cause of education in New Brunswick. She pointed out that their contribution had set a good example for the students, and New Brunswick had learned more about the world because of their efforts. Jennifer Graham announced on the scene that the Chinese curriculum made by CINB had been approved by PCEAC, which means that Chinese will become an official elective course for all schools and be included in New Brunswick’s education system, Chinese teaching is embarking a new journey. Chris Treadwell, Assistant of the Deputy Minister of Education, made a special visit after finishing another conference. He congratulated on the adoption of the Chinese curriculum and thanked all CINB members for their contributions to New Brunswick. 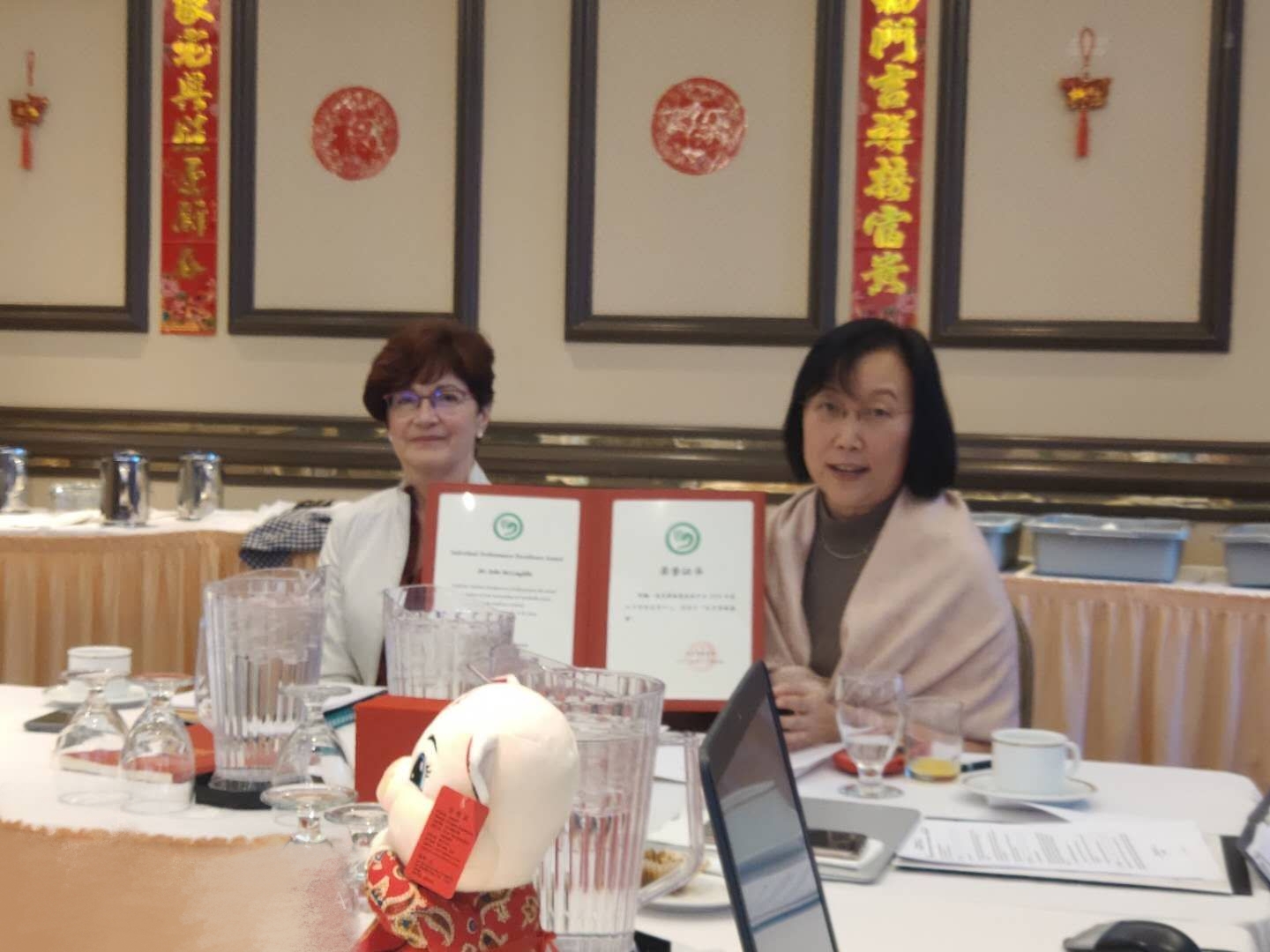 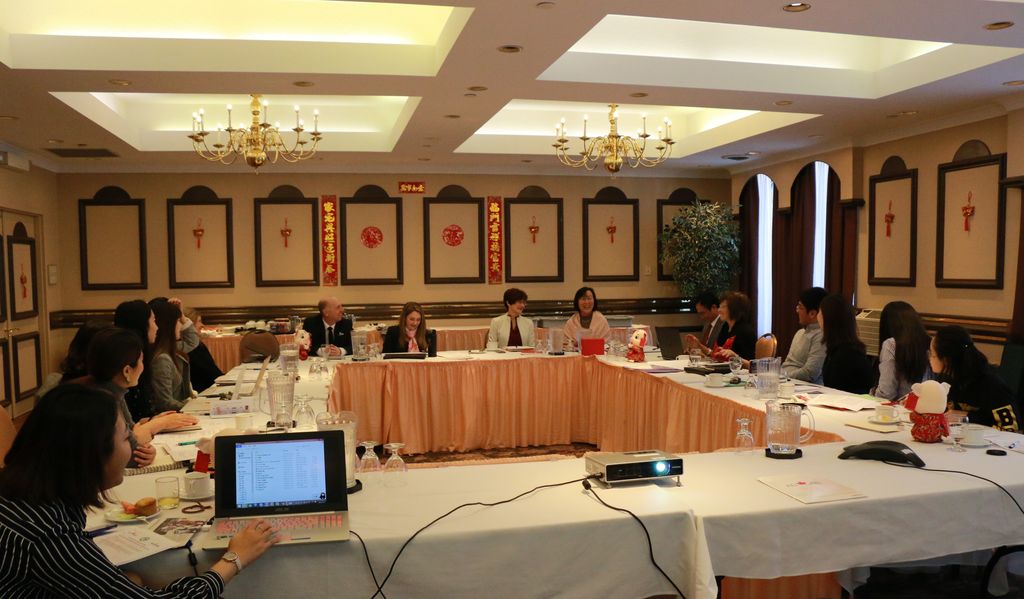 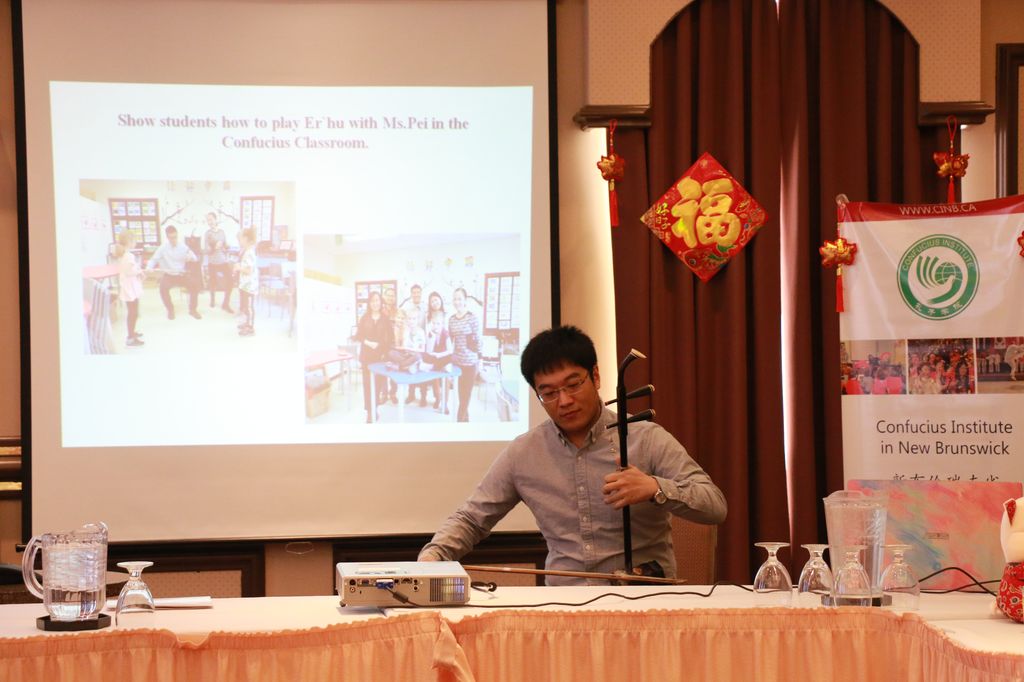 Teng Jing showed the participants the certificate of “Confucius Institute Individual Performance Excellence Award” issued to John McLaughlin, Deputy Minister of Education. “I would like to thank all the members of CINB for their hard work and thanks to the support of Hanban, the New Brunswick Provincial Department of Education, the Shandong Provincial Department of Education and Qufu Normal University. The achievements of the 11 years of hard work are the cornerstone of the coming days. Each of the 6245 Chinese learners is the seed of the future of China-Canada friendship.”
During the three-day seminar on Chinese teaching, everyone shared their learning in good faith, and they were rewarded and moved. In the report on the 7th, Liu Xiaowei was grateful for the help and growth she received in the big family. She was awarded the title of “Canadian Excellent Chinese Teacher Volunteer” on behalf of the Confucius Institute. As the first Chinese teacher of the Confucius Institute who was transferred from a volunteer to a qualified teacher, Li Nannan’s last report before leaving was difficult to conceal the emotions and shed a tear because of the coming departure. Her footprint has been to almost all the cities in New Brunswick for the past three and a half years. She is a teacher, an editor, and a big sister in the CINB family. In such a positive and inspiring group, everyone will hold the seeds of the Chinese teaching flower, take a better self, organize the luggage and start the journey again.